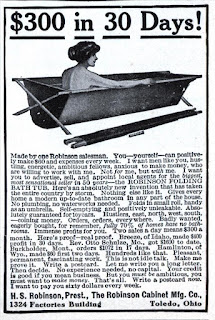 In yet another example of its extraordinarily finite wisdom, our Congress has left the building—literally—on the cusp of the sequestration budget cuts. As we all might need to generate a little extra cash in the near future because of their [in]action, I thought I'd share an inspiring bit of entrepreneurialism, 1915-style.

The Robinson Folding Bathtub needed no plumbing, was 'positively unleakable', and was poised to capitalize on the 70% of homes that allegedly lacked a bathroom. [The early 20th-century verbiage is a hoot; click the pic to read it.] The opportunities for financial gain promised by the manufacturer—'Hustlers, east, north, west, south: coining money'—sound depressingly familiar, albeit it in a different, contemporary context.
TOPICS: history, tub
Newer Post Older Post Home