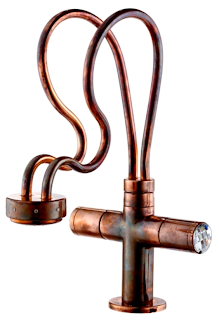 Next week, Milan hosts the international design fair iSaloni. This faucet will put in an appearance there; it is called Himmapan. That's also the name of a forest central to Buddhist and Hindu literature which was home to fabulous creatures of hybrid appearance. Mixing characteristics of fish, fowl, and four-legged beings, these animals are widely depicted in Indian and Thai art, often displaying flowing feathers and tails.