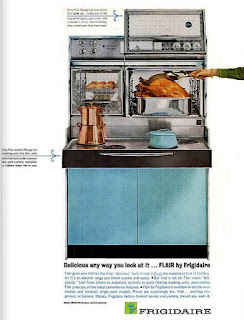 Ah, the Flair range—its slide-out cooktop and pull-up oven doors made it the choice for style-conscious cooks in 1963. [It was even featured in the kitchen of the classic TV show Bewitched.] Today, the appliance claims quite an online community of enthusiasts.

This photo inadvertently reveals a flaw in the Flair: If there's a tall stockpot [or a gleaming copper double boiler] on one of the burners, it would be impossible to roll out the bottom oven rack without playing the cooktop equivalent of musical chairs, moving the pan/s out of the way. And, as we can plainly see, it's pretty awkward trying to baste a turkey while it's still in the oven.
TOPICS: history
Newer Post Older Post Home