Two Out of Three 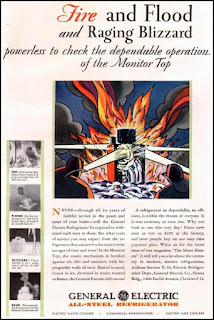 Last week we had Sandy; this week's unwelcome guest was Athena, who dropped a half-foot of snow on our already-battered environs. While we floundered without power for too many days and nights [and some, shockingly, continue to do so], had this Monitor Top fridge been on the scene, life might have been slightly less traumatic. In 1930, the appliance was put through some rather unusual tests—'In the icy waters of the Erie Canal they drowned it! They buried it in a giant tower of ice!'—and it held up to the elements.