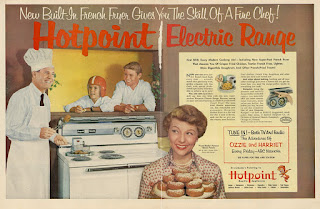 In this 1953 ad, Ozzie Nelson, an icon of mid-20th century fatherhood, shows off not only his sartorial sense [helmeted son Ricky apparently takes after his betoqued dad], but his culinary prowess, as well. Check out those doughnuts, piping hot from the range-top deep-fryer. I think ol' Oz will have to spend quite a while at the stove; to feed those growing boys and Harriet, he'll need to cook up at least a dozen.