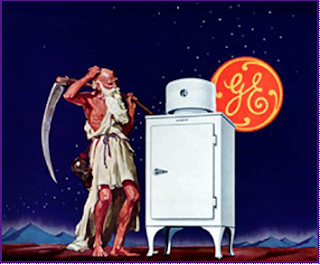 Interpretations on this curious image from 1927 are wide open. One scenario: Father Time is totally flummoxed by the longevity of the Monitor Top refrigerator, so-named because of its resemblance to the US Civil War ironclad gunship. Another take: He's confounded by the futuristic design of this kitchen contraption, the appliance equivalent of Baby New Year. One thing that's unambiguous is the supremacy of General Electric, whose glowing logo has somehow been grafted onto the sun.

For FT's sake, I hope there's a bottle or two of celebratory Champagne in the fridge. I don't see any decent wine shops on the lunar horizon.