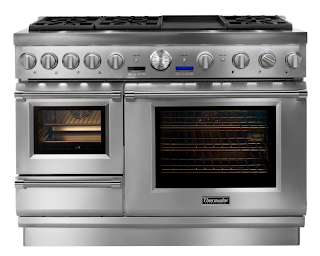 Mirages occur under extreme confluence of light and temperature, tricking the mind's eye into seeing something that's not really there. But the Pro Grand Steam range, which I previewed a few weeks ago at Thermador in the arid environs of Scottsdale, is no heat-induced illusion.

Scheduled to be released in August, it's the only range on the market to feature a dedicated steam/convection oven, in addition to a regular radiant cavity. There's also a warming drawer, which also boasts a neat technology—its entire glass bottom heats up without any electrical trace-wire running through it. Up top, you'll find six burners and a grill/griddle element. Two more design details that also impressed me: the lit-from-above control panel and the soft-close mechanisms for both ovens and drawer. So hot, it's cool. thermador.com
TOPICS: appliance
Newer Post Older Post Home