[Don't] Get a Grippe 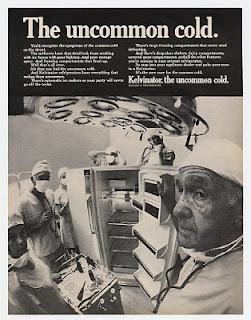 The flu that has settled in NYC this season has made its share of headlines. Last month, while I was attending the LivingKitchen show in Köln, I actually caught some trans-Atlantic coverage of the pandemic: References to 'Flu York' illustrated with gurney-filled hospital corridors popped up on German and Dutch news outlets. Even though the virus has reportedly peaked, it's casting a shadow over next week's Fashion Week festivities.

Which leads—indirectly, I know, but that's how I often roll—to today's Flashback Friday post. In 1968, fridge manufacturer Kelvinator was so confident in the superiority of its appliance that it engaged in a bit of self-spoofery. The prognosis: Continued cold.
TOPICS: history
Newer Post Older Post Home