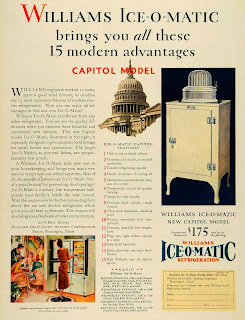 Sometimes the jokes write themselves.

I'm utterly dumbfounded at the ability of appliance designers [and copywriters] to foresee the future from the vantage point of 1930. Named for its striking resemblance to the building that's the icon of the United States government, the Capitol refrigerator foreshadowed several features of the current political stalemate. According to the ad, the Ice-O-Matic fridge is:
And one more attribute of the Capitol: It's 'easily cleaned.' We'll just have to wait until the next election to do exactly that.
TOPICS: history
Newer Post Older Post Home