What Would Superman Say? 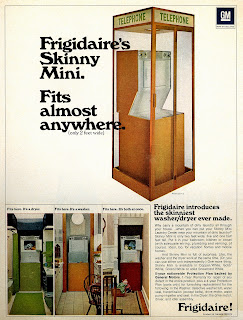 Once upon a time, people retreated into glass boxes to make phone calls. More than two million in number, these 'telephone booths' were ubiquitous across America. On street corners in big cities and small towns, in airports, on beaches and highways, they offered a quiet[er] environment for conversation.

Today, rendered virtually obsolete by cell phones, the small structures are creatively repurposed as lending libraries, urban greenhouses, and guerilla art galleries. I have yet to see a booth transformed into a laundromat, but in 1972, Frigidaire may have glimpsed the future.
TOPICS: history
Newer Post Older Post Home