What Once Was Will Be Again 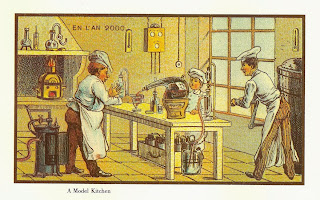 It's the final Flashback Friday of 2013, dear readers, and in a temporal juxtaposition befitting a New Year's Day hangover, we'll simultaneously look forward and back. In 1899, artist Jean-Marc Côté created fifty depictions of daily life in the year 2000. His take on the kitchen certainly foreshadows today's molecular gastronomy craze; the steampunkish 'appliances' look like they'd fit in at a hipster Williamsburg boîte.

If you're curious about the other facets of the future, you're in good company: no less a visionary than Isaac Asimov was captivated by them. In his book Futuredays, the science-fiction master muses on the entire set of Côté's illustrations, which in addition to the kitchen, include such now-realized technologies as wheeled houses, robotic floor cleaners, and variations on the computer, in addition to some questionably prescient pastimes as aerial tennis and deep-sea croquet.
TOPICS: concept, culture, history
Newer Post Older Post Home