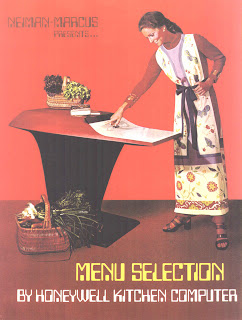 Life in 1969 was exhilarating, to say the least. Woodstock, Vietnam, and the Apollo 11 moon landing were among the year's events that shaped global culture immediately and permanently. Of course, there were more incidental impacts in the home—such as this Star Trekkian computer console that was especially designed to facilitate...menu planning. What was the tag for such futuristic convenience? Try $10,600—serious pocket change in those days, even for the N-M shopper. A two-week [!] programming course was included, although I have to wonder just how much someone who couldn't manage to put two vegetables and an entrée on a plate would benefit from it.

And if you're curious about the outfit: the catalogue describes it as a 'tabard apron'. It would set you back $28, but that seems like a small price to pay for being in the vanguard of hostess chic.
TOPICS: history
Newer Post Older Post Home