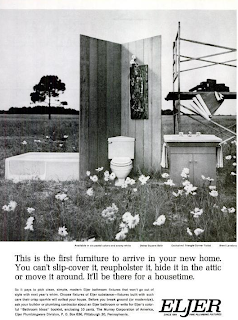 Such a radical, arty portrayal of bathroom fixtures! Not only does this vision [circa 1963] basically deny the musty post-war palette of buttercup, rose and powder blue, it also graphically broaches the then-bold idea of designing and building a new home from the ground up. Modernism was on the march, and toilets, tubs and sinks were not an inconsequential part of that movement. Of course, there would be a price for this progress: How were we to know that the daisy-strewn meadow that forms such an inviting setting here would eventually be consumed by suburban sprawl?

As recounted here, the history of the Eljer Company is an engrossing read, although there's a curious and abrupt gap in its annals that encompasses—coincidentially—the date of this striking ad.
TOPICS: history
Newer Post Older Post Home