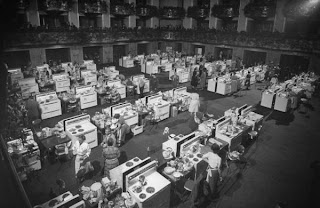 This week's flashback is a two-fer; in a roundabout, ironic way, there is a linkage between the two scenes.

In 1949, the Grand Ballroom of the Waldorf-Astoria hotel was bustling with dozens of finalists in the inaugural Pillsbury Bake-Off. Sixty years after No-Knead Water-Rising Twists captured first prize, the cooking competition is still going strong.


Not so with the setting of our second photo. It's a shot of the now-deserted test kitchen of Gourmet, a fine publication that did not deserve to die. Kevin DeMaria, associate art director of the magazine, made a series of elegiac images of the office during its final days.
TOPICS: history
Newer Post Older Post Home