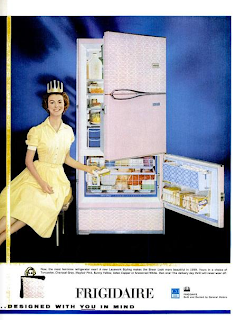 'There just isn't any frost to defrost.' You can't communicate any clearer than that quote from a three-page ad touting Frigidaire's 1959 fridge. Read further, though, and things take a little turn for the unusual. For instance, describing the door shelving we're told, 'No groping. No exploring. Snacks, milk, pickles, and cold cuts are instantly yours.' Hmmm—if not 'yours', whose, I wonder?

On the final page, shown above, we learn that a filigree-like pattern printed on the doors ['new Lacework Styling, yours in a choice of six* colors'] makes this appliance 'the most feminine refrigerator ever.' To this point, the model's imperial headgear would support that notion, too.